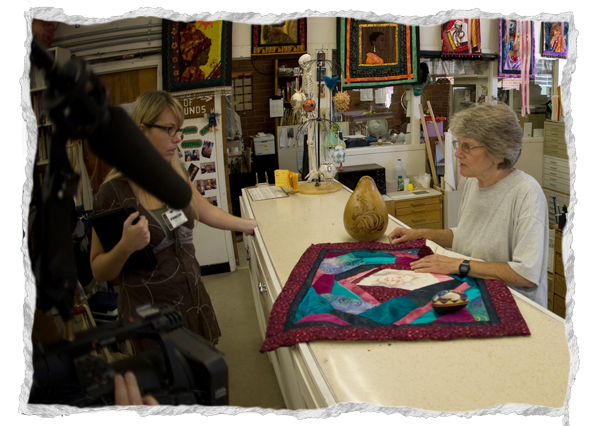 I remember the first time I walked into prison. I was nervous that night as I began my volunteer work at the California Institution for Women; my mind was racing with scenes from movies of barbed wire barricades and hardened criminals. As the guard slammed the gate behind me, I wondered if I had made the right decision. Walking toward the visiting room, the fluorescent lights seemed blinding. The smells from the dairy farms nearby were somewhat nauseating; the sounds of the alarms ringing and guard announcements kept me on edge. As I entered the inmate support group that evening back in 2001, all my preconceived notions seemed to fly back over the barbed wire fence. I was introduced to women who looked like they could be my grandmother, mother or even…myself. Were these women really murderers?

I still remember one of the first women I met, who introduced herself as “Krenny.” I slowly got to know this quiet woman who mainly stayed to the side of the group listening. I was always struck by the lines of age and worry on her face. While she seemed to be unsure of herself, there were simultaneous signs of strength. She seemed to keep to herself, yet when she spoke, all the other inmates paid respectful attention. Her shyness didn’t keep her from giving of her wisdom as a mentor among the group when she felt it was needed. I was intrigued by what might be behind the walls that Krenny built around herself as protection. Still, I felt that this woman was the type of person who would open up to me in her own time.

It wasn’t until about five years into my volunteer role at the prison that I finally got my answers as to who Krenny really was as I began documenting the support group for my last film, Sin by Silence. I was interviewing Norma, one of the support group’s leaders, asking her to tell me about any good times in prison. Prison is a horrible place to have to call home, but I also had been witness to snippets of happiness in such an ugly and dark place. Norma started to tell me a story about her struggles to go to college. There was a program at the institution that allowed selected inmates to get their AA degree. Norma wanted to attend these college classes, but couldn’t afford the fees on her 10 cent an hour wage. One of her fellow inmates stepped forward and offered to sponsor Norma in the special degree program. She saw in Norma an opportunity to invest in the future, empowering a woman who would actually have a chance at a future release from prison. Norma kept telling me how much it meant that her friend Krenny believed in her and with tears streaming down her face she called Krenny by her real name – Patricia Krenwinkel. My jaw dropped!

I had read Helter Skelter. I had heard the stories from older family members who had lived through the period of time when those crimes that had shocked the world. Like so many, I had always been mesmerized by the mysteries of the Manson Family. Was the woman I had gotten to know over the last 5 years actually Patricia Krenwinkel? Once again, the remaining preconceived notions I had were thrown beyond that barbed wire fence. Over the years, I had gotten to know Krenny as a person; not the Patricia Krenwinkel that the rest of the world knew her as. I had had many conversations with Krenny about life, love, politics and so much more. As she revealed slivers of her past in the support group, I knew that she had gone through some extremely terrible times. But, I had never connected all the dots; that those rough times might include horrific crimes like the infamous Manson Family murders.

About a year later, as I continued to document the support group, Krenny came up to me and said that she would like to go on camera. I was filming the concept of having women speak directly into the camera against a black backdrop to create a style of a visual diary. As Krenny and I walked into the hallway, I got her in position and told her where to look into the camera. It took a few moments for her to think about where to begin, but then the floodgates opened. It was obvious that this woman had remained silent about too many secrets and had kept so much pain wrapped up inside for years. As we stood in the hallway, it was as if this filming process became a therapeutic purge of her soul. I guess it was because of the years I had known her up to this point, that she finally felt she could trust someone with her deepest, darkest secrets. Even if it meant that someone had a camera in her face, it was as if Krenny had been waiting for this one moment her entire lifetime.

It was no small miracle that I was actually allowed to capture Krenny on camera. California has legislation in place that allows the Corrections Department to censor the media from interviewing their high profile inmates behind bars. However, since she was legitimately part of the support group I was documenting, there we stood together participating in a moment of unparalleled reality. As I quietly stood in that empty prison hallway, with nothing but a camera separating me and one of the world’s most notorious female killers, my mind did not race to thoughts of terror. Krenny was revealing the story of her life and the choices she had made that led her down the path toward destruction. I found a very unexpected, personal connection to her. She had been part of something so horrible and had crossed so many moral lines, could it be I was actually sympathizing for her?

As I continued to listen to this broken woman, I heard her message and “I got it.” Nothing excuses her actions nor negates the horrible things that happened. But, as she continued to share her journey, I understood more how a young girl, so beaten down physically, emotionally and sexually could get caught in the spell of madman. As a woman my heart broke for her, and I understood how at such a young, impressionable age the simplest choices can lead someone down a slippery slope. From that moment on, I began to better understand the dividing line between who this woman was and had become. The tragedy whose name was Patricia Krenwinkel and the mentor, Krenny, who struggles on a daily basis in prison to be the woman she is today.

Has Patricia Krenwinkel committed unspeakable crimes? Yes. Has Patricia Krenwinkel made decisions with horrific consequences? Yes. But, Patricia Krenwinkel has also become a new person and the world now has an opportunity to learn from this woman who society has labeled a “monster.” Life After Manson provides that doorway through which to view and actually see the transformation from the monster into a mentor and inspiration behind bars; arguably taking the focus past the final sting of such horrific crimes to offer us a never-before-seen perspective of the fragile identity of women and the process of rehabilitation. Instead of keeping Patricia’s story frozen in time, I truly hope people will listen with open ears in the present, just as I did that day in the prison hallway.

I created Life After Manson to embody a critical lesson for society and an opportunity for personal reflection as Krenny holds up the mirror to herself, to powerfully reveal the lessons she has so painfully learned that dares the viewer to do the same.